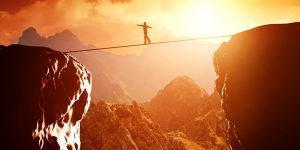 It’s funny how events conspire to produce an outcome which on first sight seems totally unexpected or at the very least not previously considered consciously.

If I asked you, do know or have you heard of – Super Yes – what would be your reply?

Not many have identified Super Yes – as a thing – in their lives but most, certainly adults, will have encountered this creature and I don’t mean in a spoof Marvel movie, no I mean in everyday life.

Let me explain before you think there’s been a generous delivery of singing ginger at FTI Towers.

Imagine the scene. It’s a beautiful sunny day and you have made the decision to treat yourself to that new car or kitchen you’ve had your eye on for a while now. It’s time to visit the showroom and as you pull up outside you are filled with the confidence and optimism that comes with knowing that you have a budget commensurate with your spending plans and this company have been advertising their great deals in the media so they must be good.

There is however a subtle, possibly even an imperceptible, shift in the paradigm of life as you enter. You’re committed now, you’ve crossed the threshold and you can see the product you’ve came here to buy but you’re also aware that you are no longer alone. There is a dazzling smile approaching and you are the exclusive target of their affections. It’s important to note that at this stage you’ve done nothing wrong and what follows is carefully structured, practised and delivered in a way that appeals directly to you. Little do you know but of all the smiles to approach you, yours belongs to Super Yes. A chameleon like creature trained to identify with you as a person and one who I always expect to appear on a David Attenborough show one Sunday night. I can just imaging those legendary whispering tones saying something like- “pay careful attention to our predators as they inspect their prey to see if they meet with their dietary requirements”.

Super Yes arrives in a blaze of self confidence and effortlessly chats about all the deals done previously, the happy clients and even finds time to extract the specific reason why you’re there in the first place seemingly without your help. He or she “helps” you spend your hard earned money and even makes you feel happy to hand over that credit card or sign that lease agreement. You are so buoyed by your purchase that you leave the showroom and decide to treat yourself to lunch to celebrate the added status in life you’ve just invested in. My God life is good. Although had you looked in the rear view mirror your exuberance may have been spiked, just a little, by the vision of Super Yes immediately channel those same affections which had felt so unique to you to the very next person through the showroom door. Then again you probably wouldn’t have thought anything other than they are bloody good at what they do and you’d be right in thinking that until….

It’s at that moment when the instant hot water tap takes five minutes to heat your water or the all new park assist feature proves it only works on a sunny day on a road surface as level as a billiard table that you realise something is off with the sales experience you so enjoyed. You decide to call the showroom because they were so attentive and caring that they’ll solve the issue for you no problem. That’s when you discover that Super Yes, aside from being an effective closer of deals, has developed a cloaking device which renders itself invisible to customers already sold to. That direct phone number diverts, as if it’s been programmed to recognise your number, direct to the customer service department because they handle with any post sale issues. At this point you realise you have been, for want of a better term, handled.

Super Yes – who wanted to know all about your family, your upcoming holiday and your amazing work life pre-sale has disappeared in cloud of post-sale dust only to be seen again when another potential pay cheque walks through the showroom door.

The key thing to remember is that your encounter with Super Yes happens when you are relaxed, in full control of your faculties and enjoying life. Could you imagine meeting this superhero when your life is in turmoil or your stress levels are such that your decision making process is potentially deeply flawed from the outset.

What is the relevance of all of this I hear you say? How can this possibly relate to people going to prison or people who require help prior to going to prison? Read on please…

Another excerpt taken from the diary of a first time prisoner.

“When I was taken downstairs from the courtroom after being found guilty my legal team visited me and on reflection, I’d forgive myself for thinking, their main concerns seemed to be confirming they had done all they could and re-affirmed that they had told me that this was indeed a possible if not probable outcome. At that time all I was interested in was how were my family who had just sat through sentencing and what was literally going to happen next to me. I’m not suggesting for one minute they didn’t do their best (because where I am that thought process would be entirely destructive) or that they didn’t care but at that moment it was confirmed to me that they had, to a large extent, failed to understand me as a human being.

They explained that I would be going to prison shortly but they had spoken to staff in the court and I’d be going to a single cell i.e. no cellmate, which had been a concern for me and that they’d be visiting me in prison to check on me despite there being no other legal matters to discuss but they would visit because they were interested in my wellbeing. My point is they didn’t negotiate a single cell, as was inferred or subtly suggested, that’s just the way it is here. Why they felt the need to do that still puzzles me. As far as visiting me goes I’d bet my life they don’t. I realised at that moment that I had fallen for a sales pitch from someone who made personal, human, promises that simply couldn’t or wouldn’t be kept. For me that is quite distinctive from their ability to protect me legally and I regret allowing that personal negligence to develop but despite always being an assertive person in regular life I felt almost disabled by my situation. It was as if I had accepted that this level of interaction was all I deserved now after all I had done something wrong, I had let my family down, I had ruined my life and maybe this was just one of the things I needed to accept moving forward.

I think back to sitting waiting for appointments way past the allotted time, to being told that I’d get a call on one day only to find it wouldn’t come at all. To not getting replies to e mails or requests for feedback despite being promised the same and thinking why the hell did I put up with that. I spent time with a counsellor before going to court, maybe a dozen meetings, because I wanted to find out why I’d got myself to this place and found myself talking for an inordinate amount of time about the stress and anxiety that I felt dealing with my lawyers failure to honour simple service promises such as clear communication. The counsellor actually included that in her report to my GP but my GP removed that section of the report prior to it going to my lawyer in case it worked against me in my relationship with them when I was reliant on them to defend me. Looking back I feel that I bought a sales pitch from someone who told me what I wanted to hear to get my business and that stings. It feels like writing these thoughts down offer me some form of release and I have decided that at some time in the future I may speak to the lawyer and explain how I was made to feel by them and my circumstances. Not because it can influence anything for me anymore but more in the hope that it strikes a chord and when they are asked a question by someone else in the future they’ll pause before making a commitment, however trivial to them, as people hang on their commitments as their lives are attached to them. I feel absolutely no ill will towards them just a real sense of personal disappointment.

Anyway, I wrote another poem which is quite depressing, that’s the poem, not the fact I wrote it or bloody hell that is probably more depressing. Tomorrow I think I’ll write about Brexit, I need something else to rant about and having a conversation with myself seems the only way to achieve that. So Farage, Johnson and all you liars I’m coming for you lol… for now my depressing poem and I’m off to the gym because I have a fitness goal in mind to distract me from the craziness in here. ”

The soundtrack of sadness vibrates in my head

No escape is secure not even in bed

Nightmares of failure explode in my brain

Will there ever be happiness again

Alone in a crowd an excruciating pain

Dreams of my wife and being together again

Exiled from family struggling for breath

Could this be hell or a sample of death

Self loathing and shame tough to bear

Remorse overwhelming does anyone care

A daily grind of acting and liaring

Visits by loved ones simply beyond measure

The temptation to fold is haunting and real

Blessed with family and love I resolve not to kneel

This post is not an attempt to criticise anyone – in actual fact I know the diary author has since spoken since his release with his lawyer and not only does he feel they reached common ground but there has also been support in his reintegration – but more about the wider need to realise that each of us in in our own ways are salespeople in our lives and the promises we make we must ensure we deliver on and if we can’t do something for any reason we simply should not commit or say Yes in the first place as it only leads to a breakdown in a relationship and the ripple effects whilst unseen by you can be quite devastating especially to those who find themselves in a vulnerable position.

This will probably be the last post before Easter, thanks for taking the time to read, and we wish everyone who reads and even those do not a Happy and Holy Easter @firsttimeinside out.